Now we increase the number of votings from 14 to 6000. The vector with votes is longer but the similarity is calculated in the same way -the Euclidean distance.
One diagram cannot present all 6000 votings clearly. We do not draw them; the only thing presented at the diagrams are names of the Members of Parliament. To make the diagram more legible, next to the names I put the name of all the clubs that given Members of Parliament belonged to during the 7th term of the Sejm. Colours represent clubs in which politicians spent most of the period of the 7th term. Below you may see a fragment of the tree. It shows that J. Zalka and J. Gowin voted in a rather similar way but very different than rest of their club. The tree also allows us to notice that both of them cast most of the votes while they belonged to PO, but both of them also belonged to ZP and KPSP. Members of Parliament from PSL and PO usually voted quite alike and for that reason they belong to the same subtree. 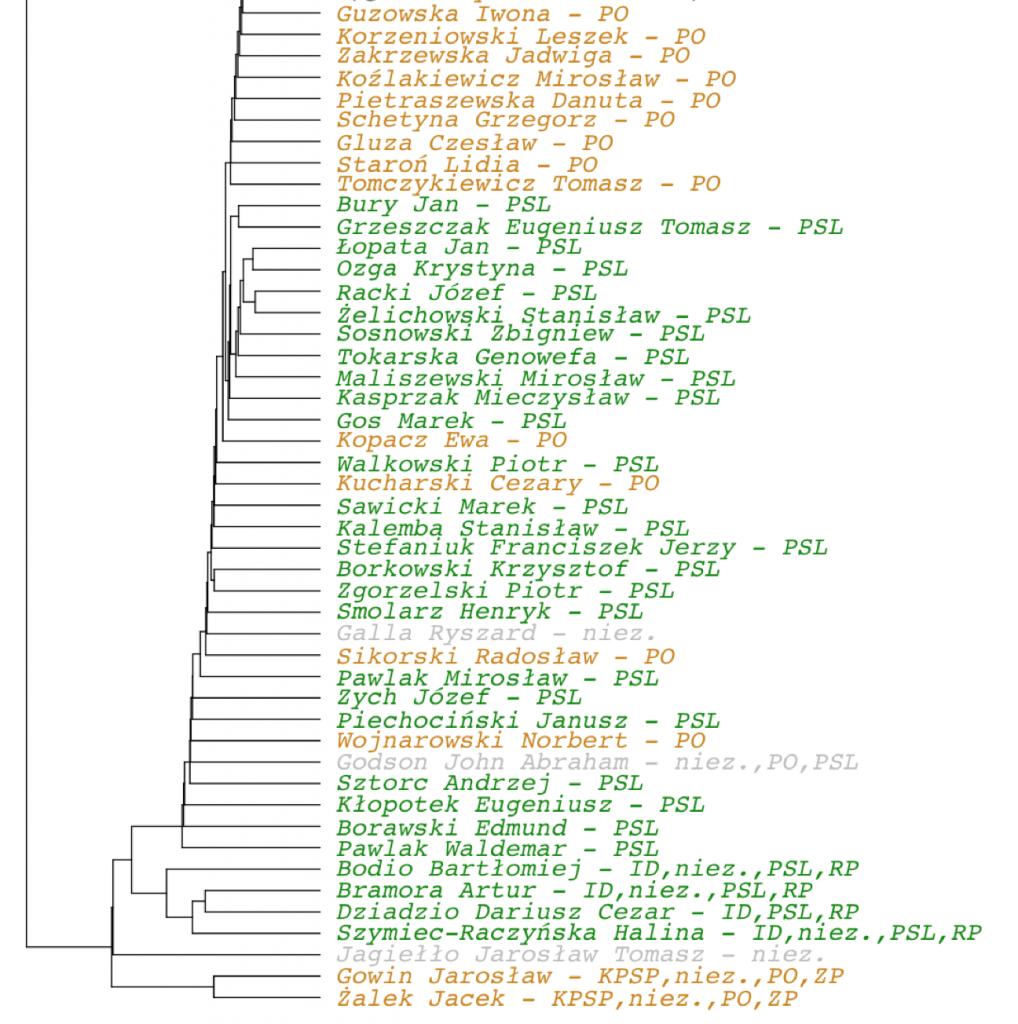 We may also present the whole tree, although it has many leaves. When we include the MPs who left the Sejm and were elected for the Sejm, we have over 500 names. As we may see, the Members of Parliament from PO in most cases voted similarly. They create a separate subtree with PSL. PiS with a part of the right wing also creates its own subtree. The remaining two subtrees represent SLD and Twoj Ruch/Ruch Palikota. 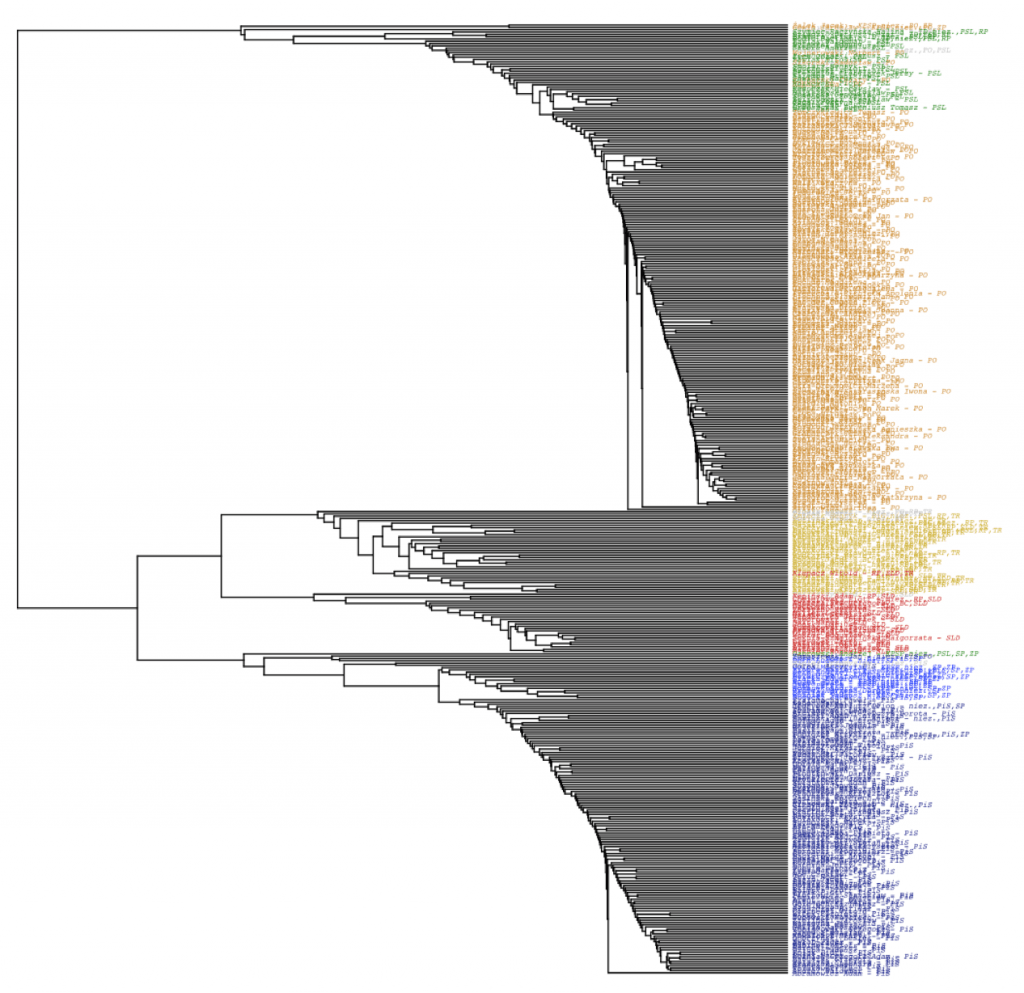 The same tree may be presented in various manners; above, for example, we may see a more packed version of it. 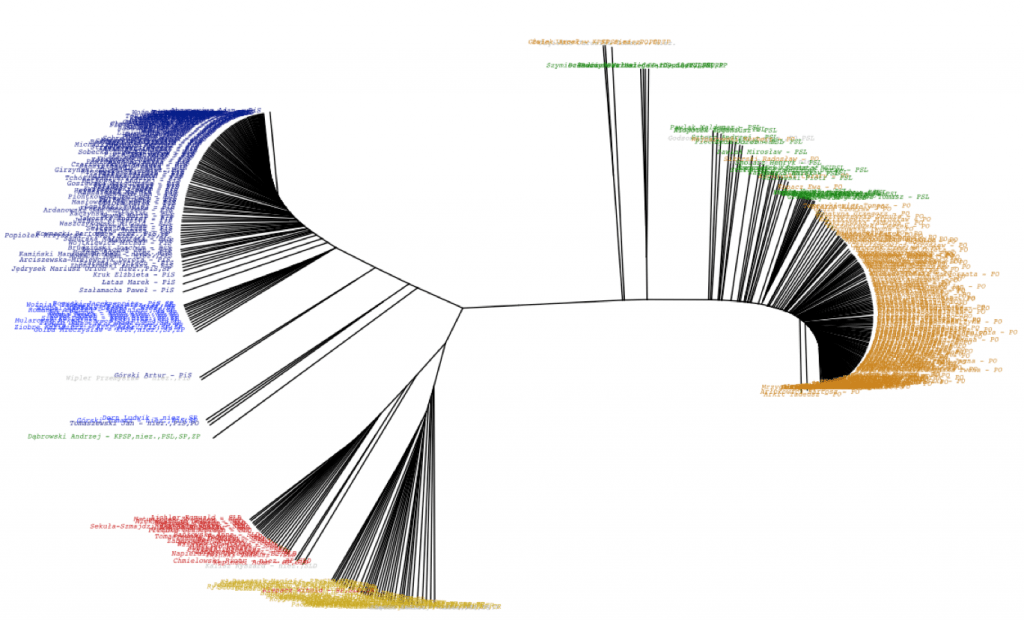 However, a little fan like the one above is far more comprehensible. There is more space for names of the Members of Parliament.
If we take into consideration all the votings, we will notice that the greatest differences exist between the government and the opposition. It turns out that there are two Members of Parliament on the side of the government (Jaroslaw Gowin and Jacek Zalek) who usually voted as MPs from PO (the colour on the diagram corresponds to the club that a given Member of Parliament belonged to during most votings), yet their profiles differ considerably from the profiles of the remaining MPs. Besides, that pair migrated from one party to another, what may explain their incompatibility with the stance of PO. As far as PiS is concerned, the least compliant voters were Gorski Artur and Tomaszewski Jan (who finally transferred to PO at the end of the year).
There are many more such interesting stories where a typical voting profile is incompatible with the ‘main’ club; they can be found in every club. Just look for them for a while. 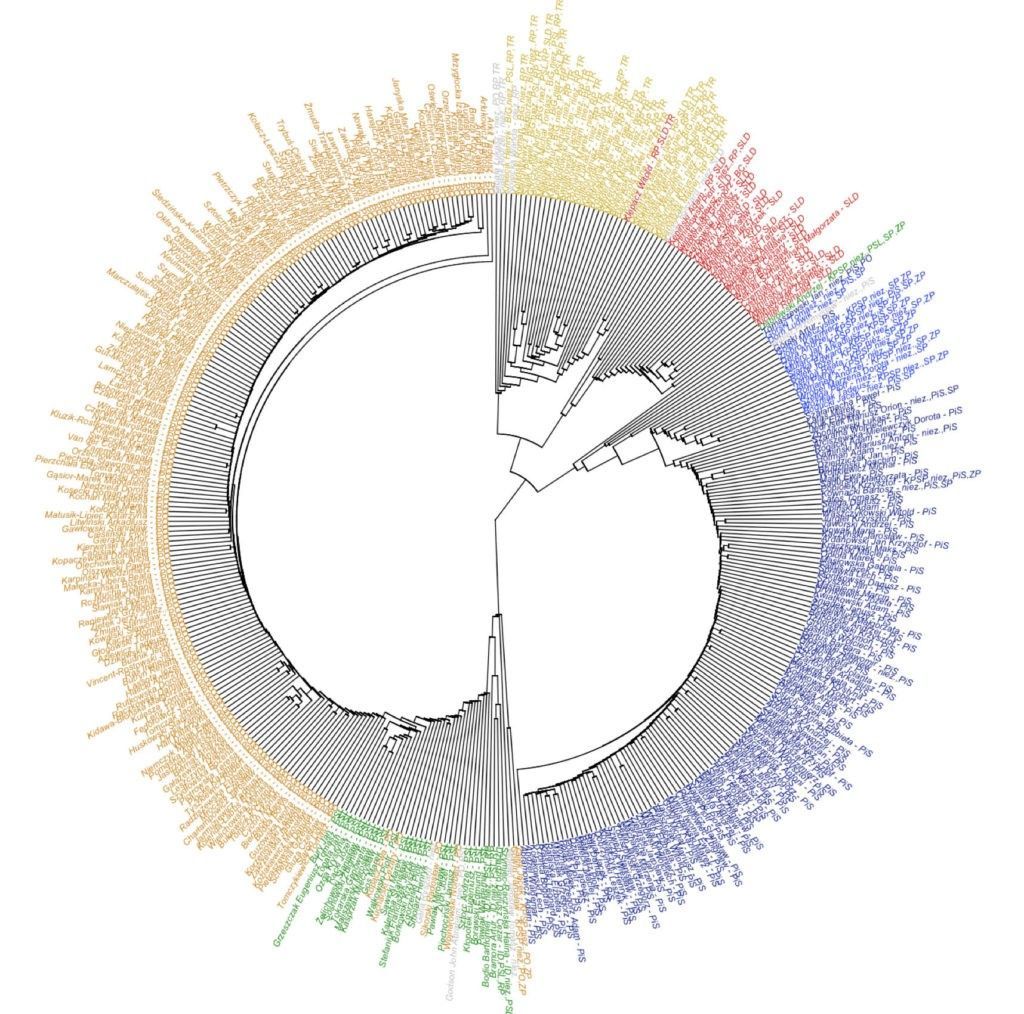 When we look at votings on specific acts, the pictures tend to change. Below you may see an example diagram concerning voting on Personal Income Tax Act. 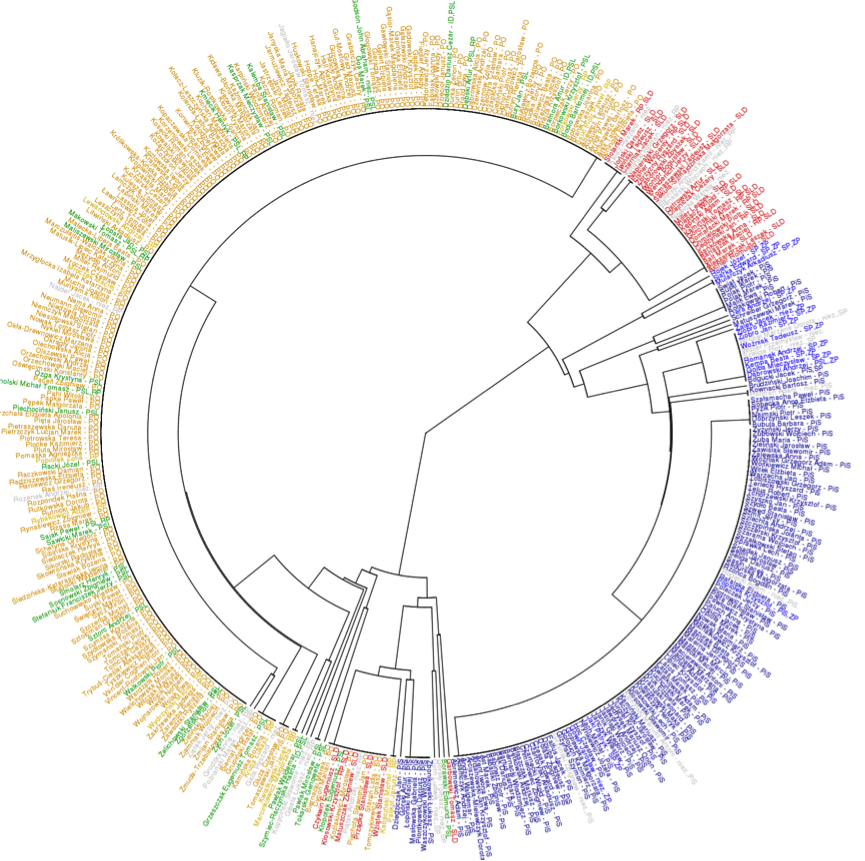 Here you may look at the results of the votings on the Act on Higher Education. PO and PSL voted so similarly that the Members of Parliament belonging to both clubs are mixed. SLD and TR create their own trees. There are also groups of MPs, both within PO and PiS, who in all 53 votings (that is the number of votings on that act) voted identically (their tree branches are very short). 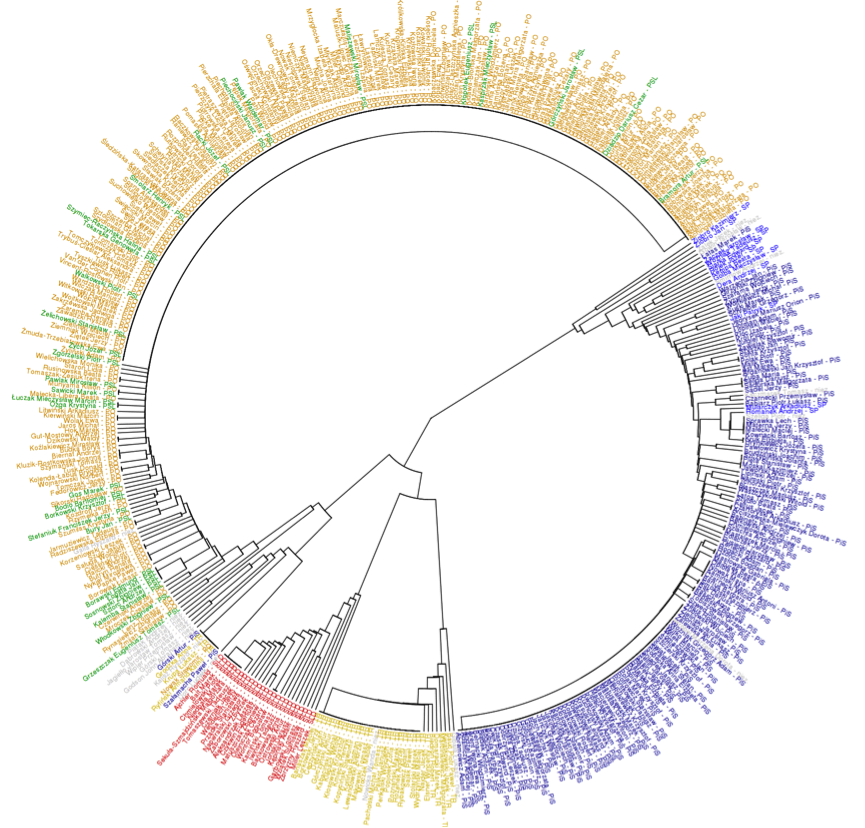 You may see an enlarged version of every diagram by clicking on it.
Computer specialist sometimes joke that, unlike the normal trees, their trees grow upside down.
As it turns out the trees created by data analysts may grow in every direction. Or in every direction at the same time!
R packets- cluster, ggdendro and ape– were used during analysis of the clusters.
The source codes can be found at github: https://github.com/mi2-warsaw/JakOniGlosowali/tree/master/glosy.
Data on votings may be found in the package called sejmRP: https://github.com/mi2-warsaw/sejmRP.