deepsense.io, a pure Apache Spark company providing code-free data manipulation and predictive analytics, is proud to announce that its parent company CodiLime has won the Rising Stars Award and was ranked 2nd among all the companies in Central Europe considered for this special category at the prestigious 2015 Deloitte Technology Fast 50 in Central Europe. CodiLime was the second fastest-growing technology company, recording a 2,506% increase in revenues between 2012 and 2014. Subsequently, the company is automatically nominated to be recognised as one of the fastest growing technology companies in Deloitte’s EMEA Technology Fast 500™. 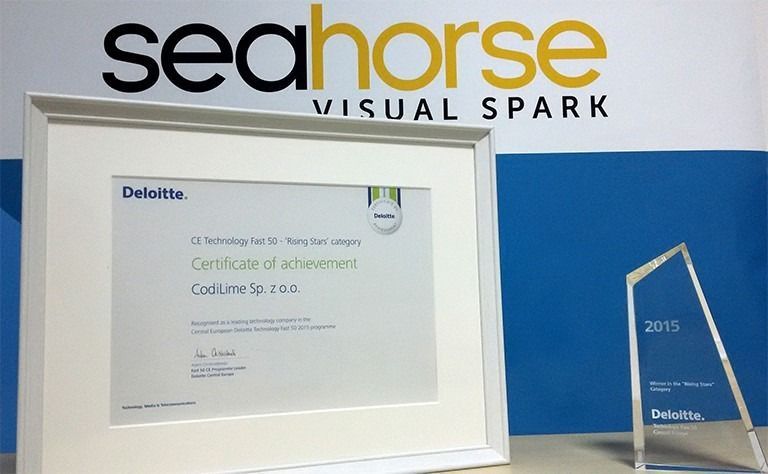 The Fast 50 ranking is in its 16th edition in Central Europe, the report and ceremony was organized by Deloitte in Warsaw, together with Warsaw Stock Exchange among others. The Central Europe Technology Fast 50 ranks the region’s fastest-growing tech companies, based on revenue growth over a four-year period. For the 2015 Rising Stars ranking, revenues from 2012 to 2014 were analysed. Nominees in the Fast 50 are judged based on their revenue growth, innovation and technology development.

Tomasz Kulakowski, CEO of CodiLime and deepsense.io: “We’re very honored to be distinguished as as one of the 50 fastest growing technology companies based in Central Europe. The Rising Stars award demonstrates our team’s effort to deliver state-of-the-art solutions with our combination of brands and services from Software Defined Networking (SDN), and Security to Machine Learning with our flagship product deepsense.io, a platform for Big Data analytics based on Apache Spark.”

Being awarded and recognized among Deloitte’s 2015 Rising Stars exemplifies CodiLime’s continued push to deliver relevant and marketable technology. New strategic partnerships and the recent launch of Seahorse Community Edition by deepsense.io, show the major milestones that are achieved by the company, and further attest to the progress that management has made.

“The CE Technology Fast 50 report is all about celebrating companies large and small, public and private, local and global that are delivering technological innovations which drive industry and business in our region forward,” said Alastair Teare, CEO of Deloitte Central Europe. “We believe it is important to acknowledge industry leaders who are able to turn great ideas into stunning realities, and we are proud to unveil this year’s cutting-edge innovators.”

This is the latest in a long list of achievements for CodiLime, with recognition in past years including EY Entrepreneur of the Year and TechCrunch DISRUPT Pitch-off Winner as well as strategic partnerships with Intel, Hortonworks and Mirantis.

About Deloitte Technology Fast 50:
The Deloitte Technology Fast 50 in Central Europe is a programme that recognizes and profiles fast growing technology companies in the region. The programme, which is now in its 16th year, ranks the 50 fastest growing public or private technology companies based on revenue growth over a four-year period. For the 2015 ranking, revenues from 2011 to 2014 were analysed.