I’m forming a group of students and grads interested in data analysis: The MI^2 (square) Group. The name comes from the fact that we have students from MIM University of Warsaw and MINI Warsaw Technical University. We are playing with different projects and ideas. Today you will read about one of them. The article below is prepared by Witold Chodor and it’s a summary of his bachelor thesis (here you will find the thesis, it’s in polish).

A lot of people ask themselves a question what the limits of athletes’ abilities are and how long they will be still capable of beating another records. The question had frequently crossed my mind as well. When I came across an article of D.C. Blest entitled ”lower bounds for athletic performance” which was written in 1996, I decided to investigate this issue more thoroughly by using more extensive data. 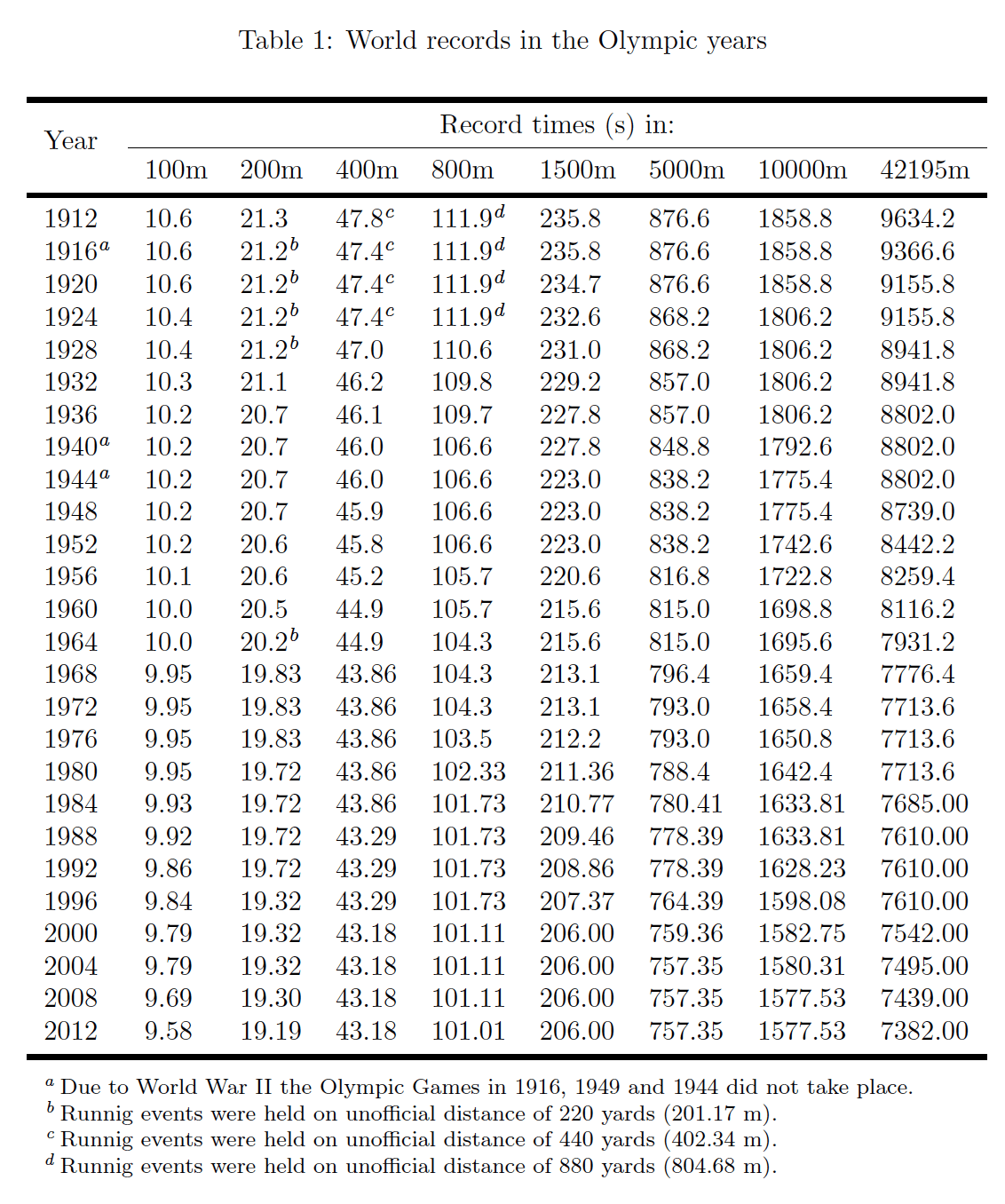 At this moment the main task was to find the estimates of the parameters αi and βi. It became much easier after having found the logarithm of both sides of the equation (1). As a result, for the i-th Olympic year I obtained linear model 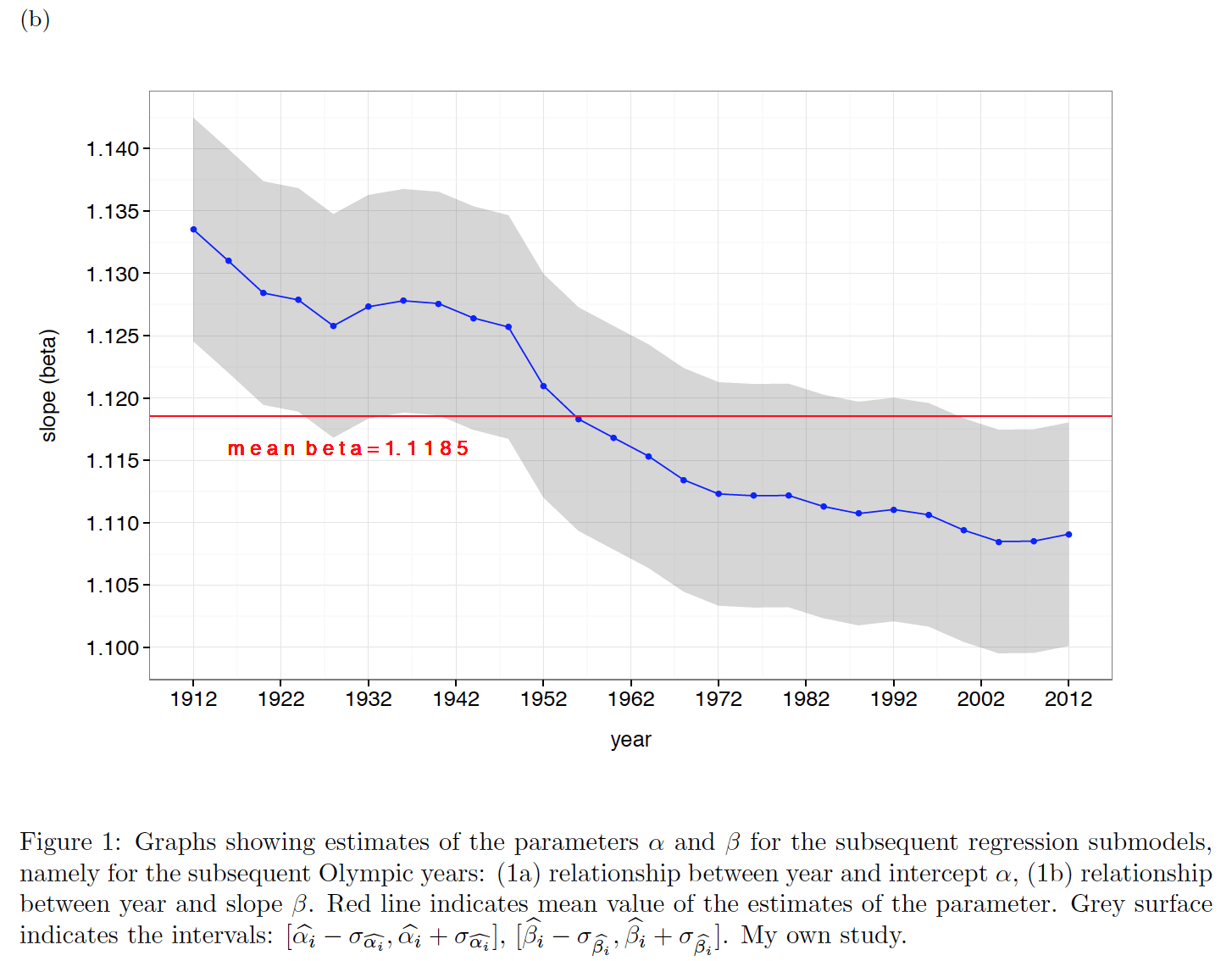 I will remind that my intention was to find critical values T∞,j for each of the eight distances. It would be easier if I were to estimate the value of only one parameter of the model. I assumed that, therefore, for each i ∈{1,…,n}

Then model (2) took the following form

Once again I used R program to find estimates of the parameter γ. In the figure 3 we can clearly see that the subsequent values of the parameter γ form a strictly decreasing sequence. It is obvious that they are greater than zero for Tij and Dj are positive (even grater than one – we should not expect that the athletes will start to run longer distances with an average speed greater than in shorter ones). These two pieces of information allowed me to state that the limit γ∞ has to exist. 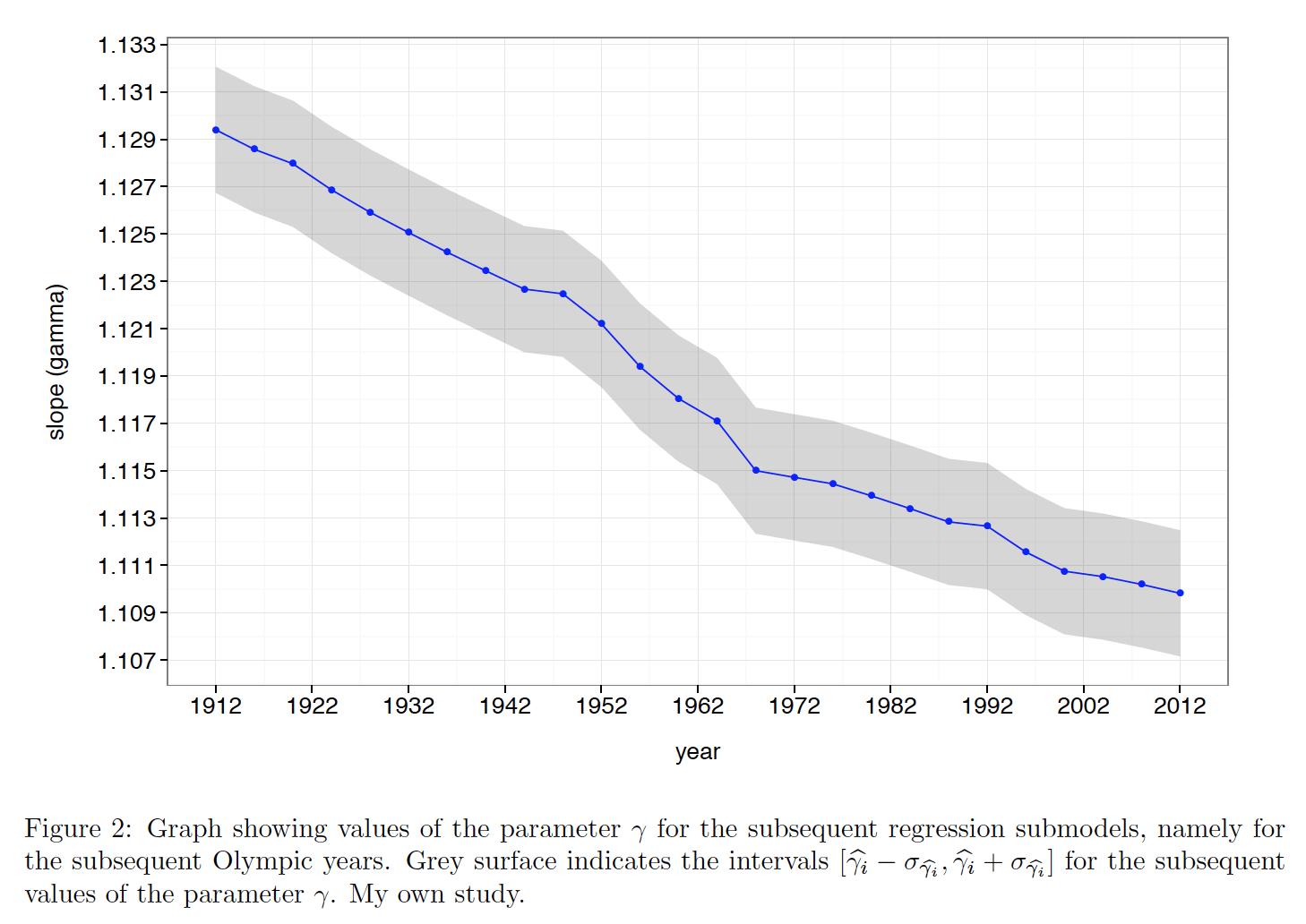 Prediction of the limits of athletes’ abilities

In this part of my thesis I was supposed to find a nonlinear curve which will fit the values of the parameter
γ the best. Having such a curve, I was able to determine critical value γ∞. I introduced the following notation:

Then I obtained a nonlinear model of the following form

I took into account 7 different nonlinear models, of which, as it occurred, the antisymmetric exponential model (figure 4) fits γi the best. 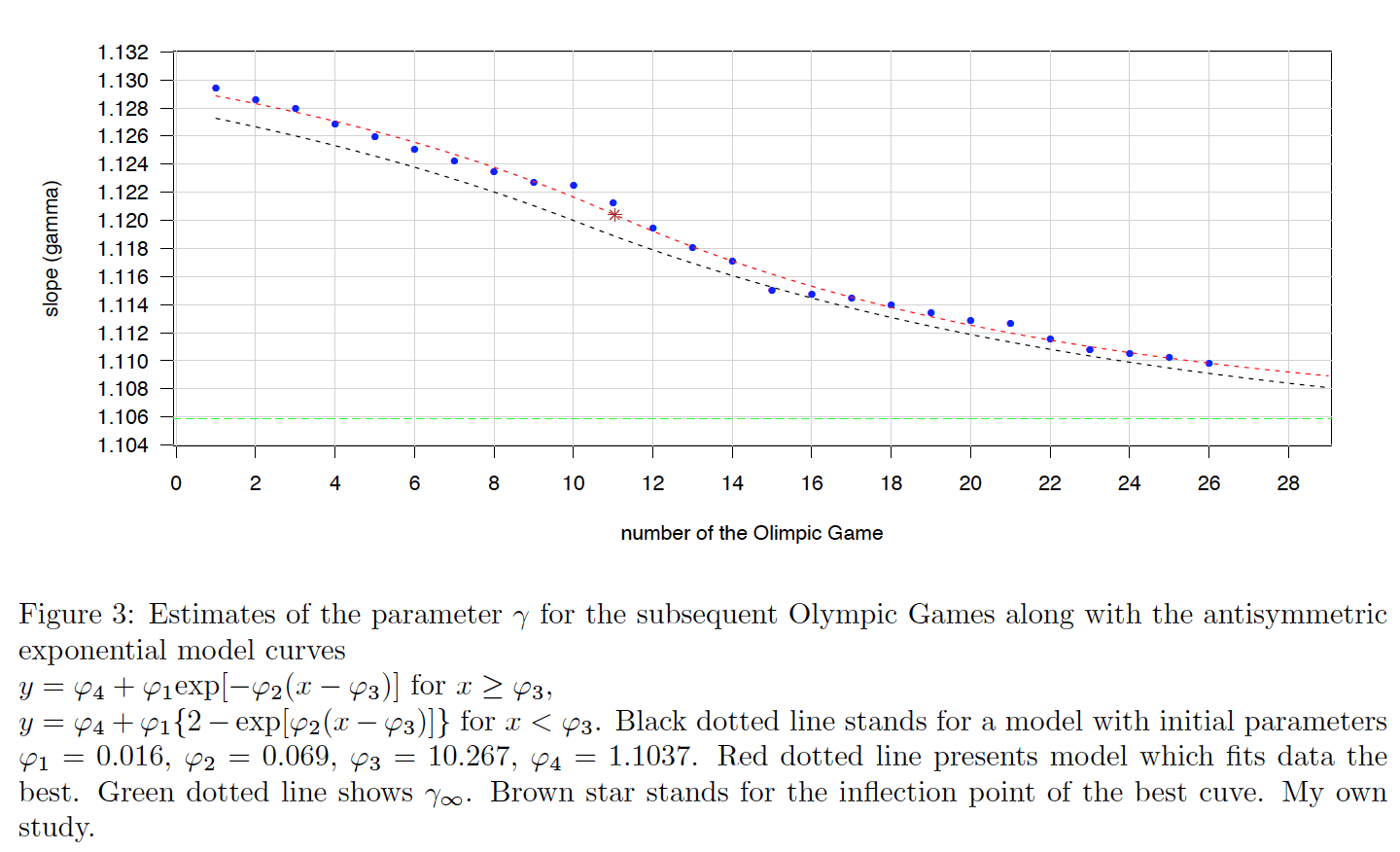 If I finished the data analysis at this moment, it would turn out that predicted limits of athletes’ abilities in some distances are greater than records noted in 2012, which is a complete nonsense. This is why it is worth examining residuals in model (3). The analysis of the figure 5 shows that for distances: 200m, 400m, 10000m and marathon residuals are negative throughout most of the Olympic Games, which proves why Ti,j < hat Ti,j for j=2, 3, 7, 8. Taking this into consideration I assumed that

As a result I obtained the following formula to calculate predicted critical times. 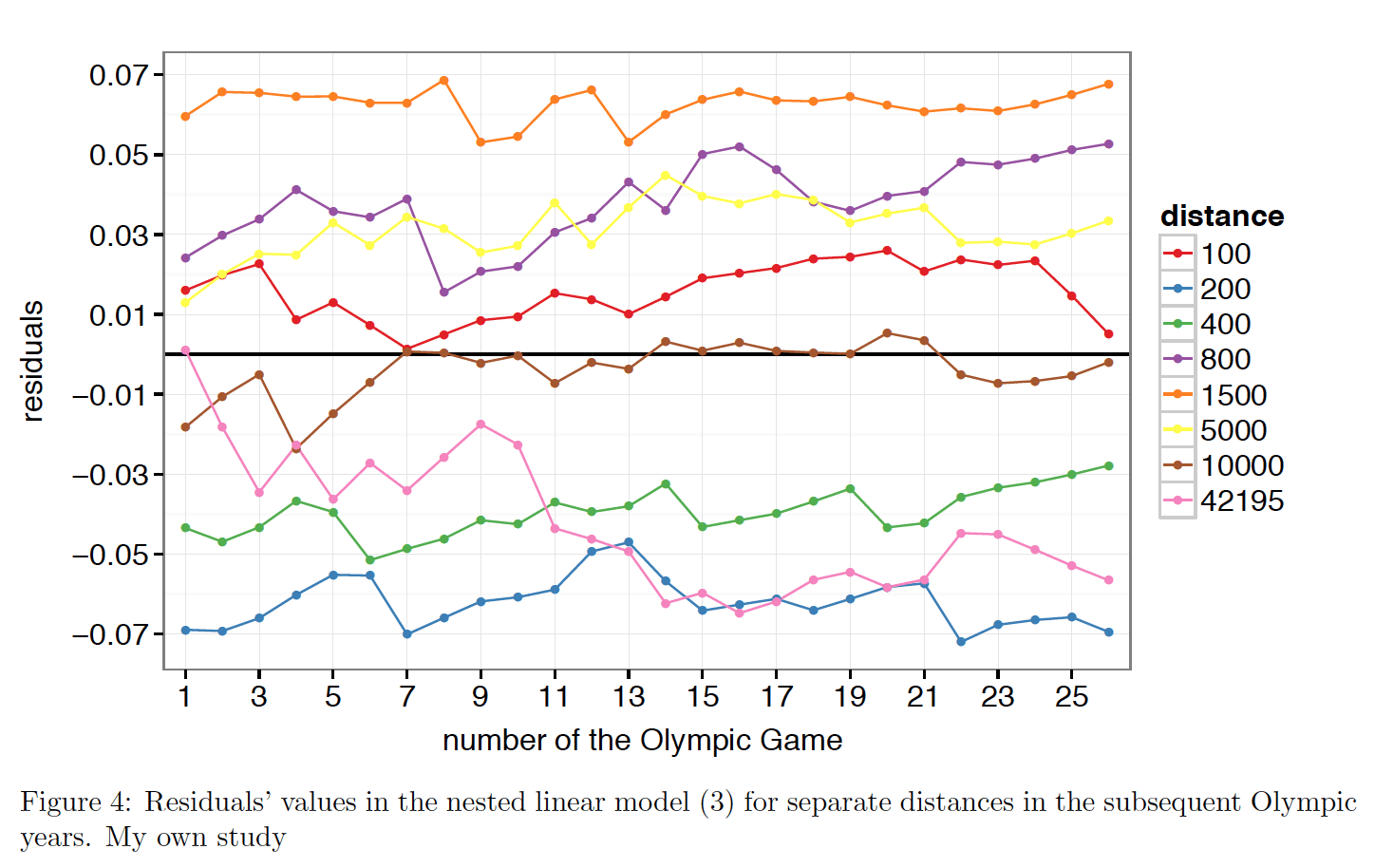 After having the correction (equation (4)) taken into consideration, I could present limits of athletes’ abilities in investigated 8 distances. The diagnostics of the antisymmetric exponential model, which fits values of the parameter γ the best (according to decreasing RSS value) proved that it didn’t fulfil each of the required assumptions. I acknowledged that, therefore, it was worth showing some kind of an interval of the limits of athletes’ abilities. This is why, I also put predictions obtained by using two other models in table 2, which held second and third place (according to decreasing RSS value).