A few days ago we released Seahorse 1.1, an enhanced version of our machine learning, Big Data manipulation and data visualization product. Today, we will analyze statistical data about births in the USA over the last century and show you, how easy is data visualization with the new version of Seahorse.

The input dataset consists of 5,647,426 rows representing newborn children’s names in the U.S., aggregated by name, gender, year and state. Due to privacy reasons, names with less than 5 babies born in the same year and state were excluded from the dataset. Each row consists of 6 cells: Id (numeric), Name (string), Year (numeric), Gender (string), State (string), Count (numeric). Please note that we will be using only the demo version of Seahorse (in contrast to full-scale Spark cluster Seahorse deployment, this version works on a single machine with limited resource consumption) and the experiment execution may last more than 15 minutes.
We will create a workflow for data analysis and explore the data using Seahorse. We will show you how to create the experiment step-by-step, however, the final version can be downloaded here. To follow along with this post and fully understand it, download and install Seahorse 1.1 using these instructions.

The first thing we need to do is load the data into Seahorse. This is done by placing a Read DataFrame operation on the canvas and modifying its parameters:
SOURCE: https://s3.amazonaws.com/workflowexecutor/examples/data/StateNames.csv
Run the workflow by clicking the RUN button in the top panel. Depending on your internet connection speed, it will take up to few minutes to download the data. When the execution completes, we can see what the data looks like. Display DataFrame’s report by clicking on the output port of the Read DataFrame operation. 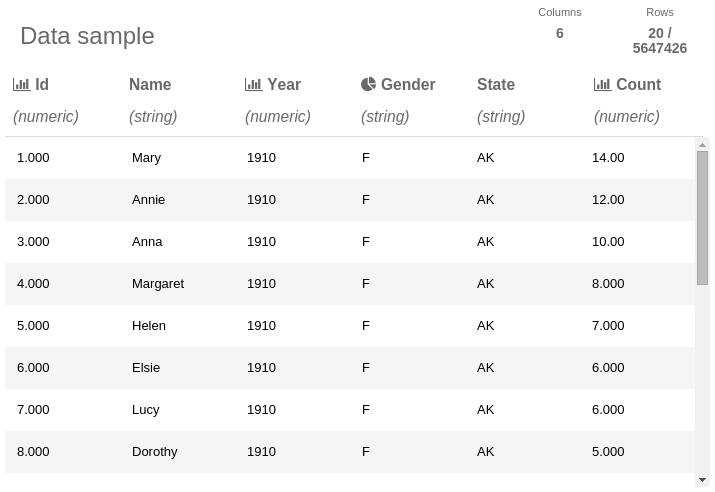 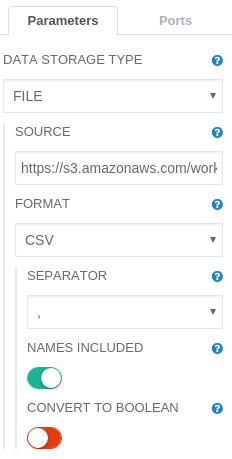 By clicking on the icons in report header, you can see more information about the whole data set (not just the data sample). Click on the Year column icon to see its values’ distribution: 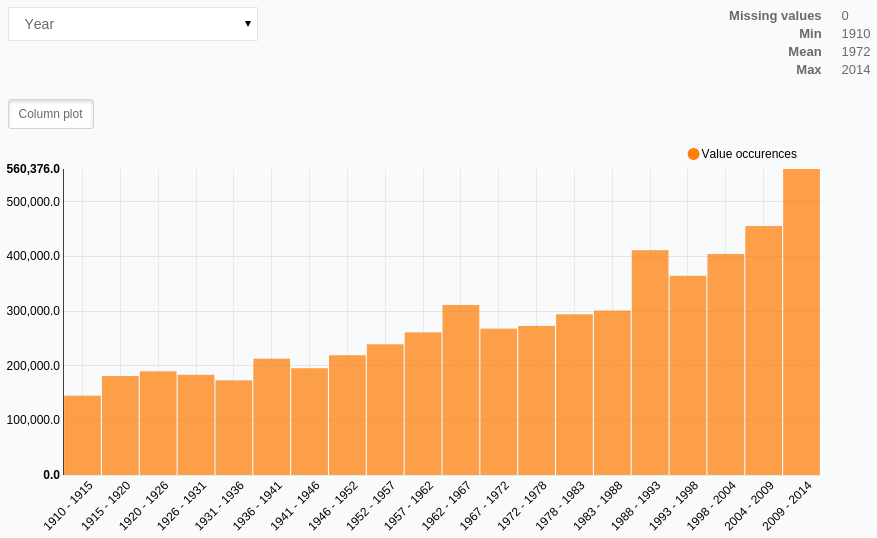 As we can see in the histogram, we have data for the years 1910 to 2014. Another interesting information is that we have a lot more data from recent years.
Now, let’s choose the Gender column in the report: 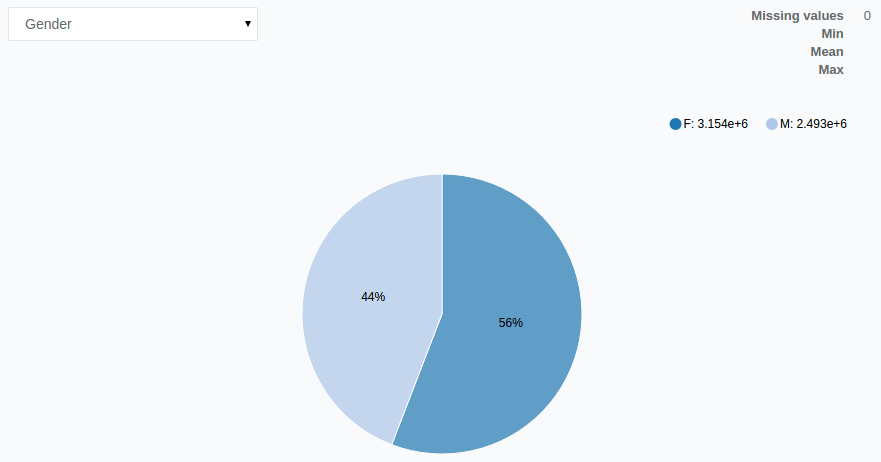 The pie chart for the Gender column illustrates that there is more data for females than males. Since this is official government data, we can assume that there are more female newborns than male, or that unusual names are more popular for males thus are not included in the dataset.

Let’s take a closer look at the female names (an analysis of male names would be analogous; if you feel confident, you can explore male names while following this 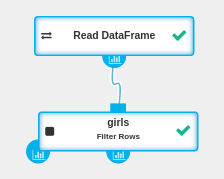 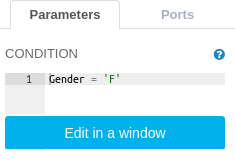 Finding the Most Popular Names

The first question we will explore is:  what names were the most popular. We need to sum the Count column for every name, disregarding the year and the state in which the  child was born. To achieve this, we will use a SQL Transformation operation. Let’s leave dataframe id set to `df` and just modify the expression parameter:
EXPRESSION:select Name, sum(Count) as Count from df group by Name order by Count desc 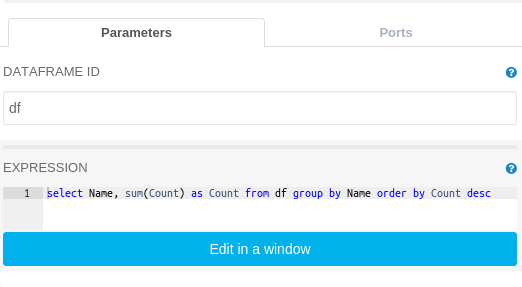 To find the most popular names in a certain state we need to execute a sequence of operations. It is a good practice to enclose such a sequence within a “procedure” which can be reused later.
To do that we need to use a Create Custom Transformer operation. Please drag and drop Create Custom Transformer to the canvas and click the Edit workflow button on the operation parameters panel. This takes us to a new canvas where we can create a custom Transformer. A Transformer is a function which takes a DataFrame as an input and returns another DataFrame as the output. We want to create a Transformer that calculates the most popular names in a given state.
To do that, we need to:
1. Calculate how many times each name was given in every state. 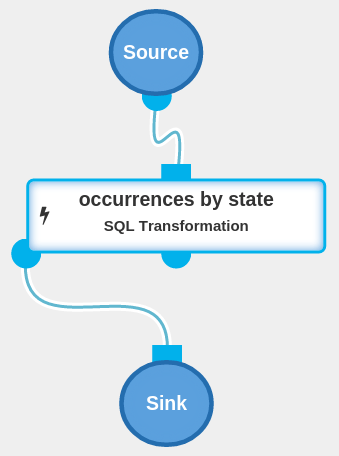 We can achieve this by executing a SQL Transformation operation:
EXPRESSION: select df.Name, df.State, sum(df.Count) as AllTimeCount from df group by df.State, df.Name
2. For every state, calculate number of occurrences for the most popular name in the state. 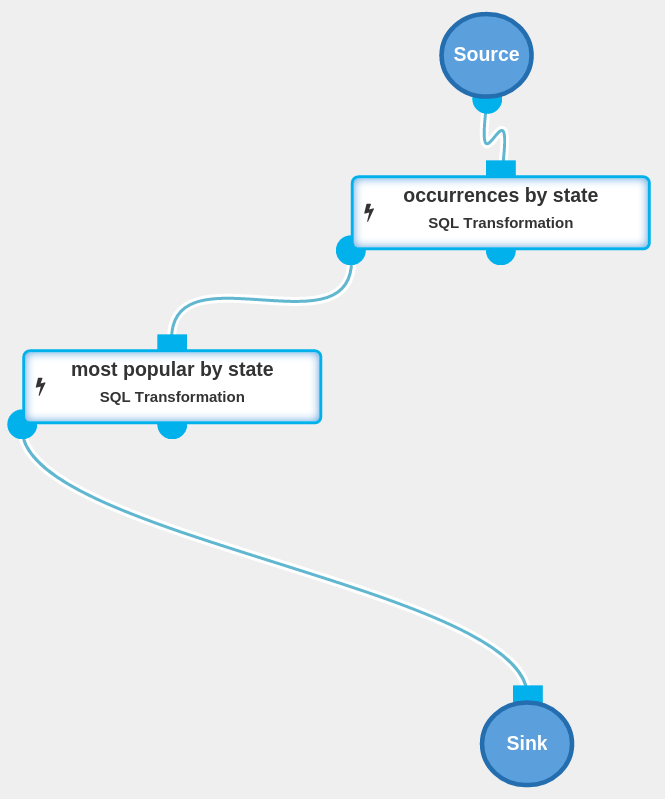 In order to do so we need to execute a SQL Transformation operation:
EXPRESSION: select State, max(AllTimeCount) as MaxCount from df group by State
3. Now, we will use a Join operation to filter out only the most popular names for each state. We will join name occurrences (from step 1) with counts of the most popular names in every state (step 2). 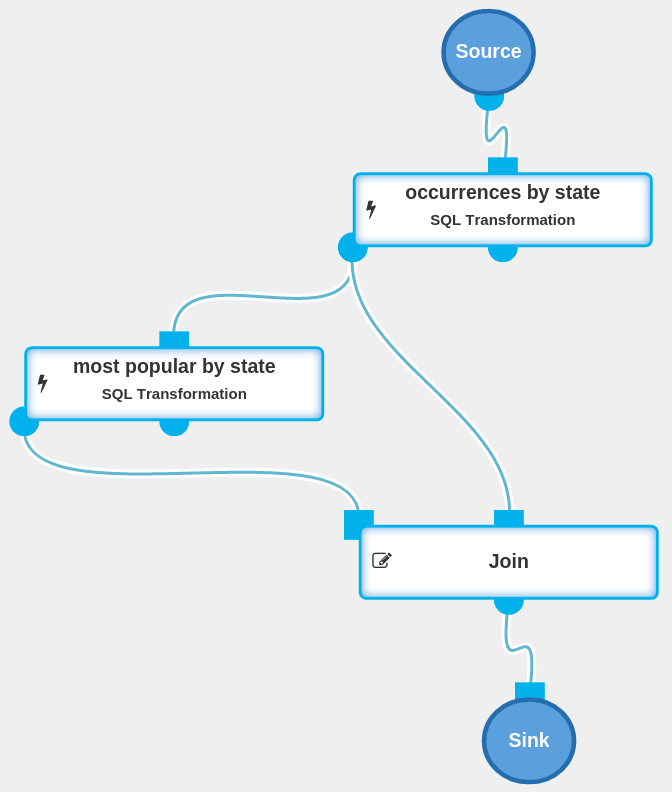 Close the inner workflow by clicking the CLOSE INNER WORKFLOW button at top of the screen.
Add a Transform operation to the canvas and connect it with nodes, as shown below: 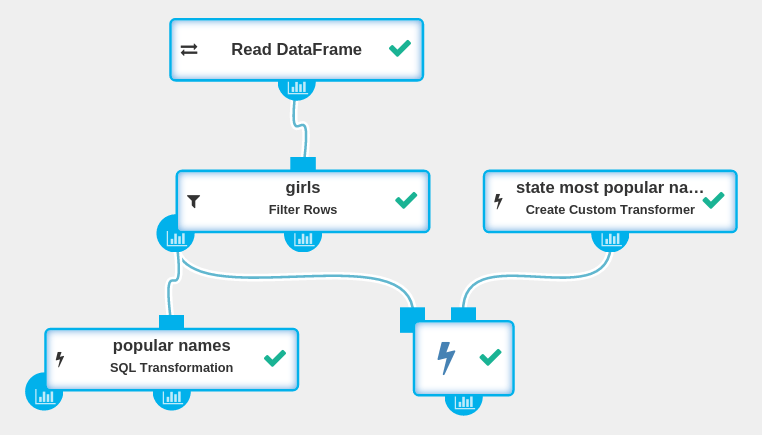 After we execute the current workflow and open the report for the Transform operation, we can see which names were the most popular in which state. By clicking on the Name column, we can see its distribution: 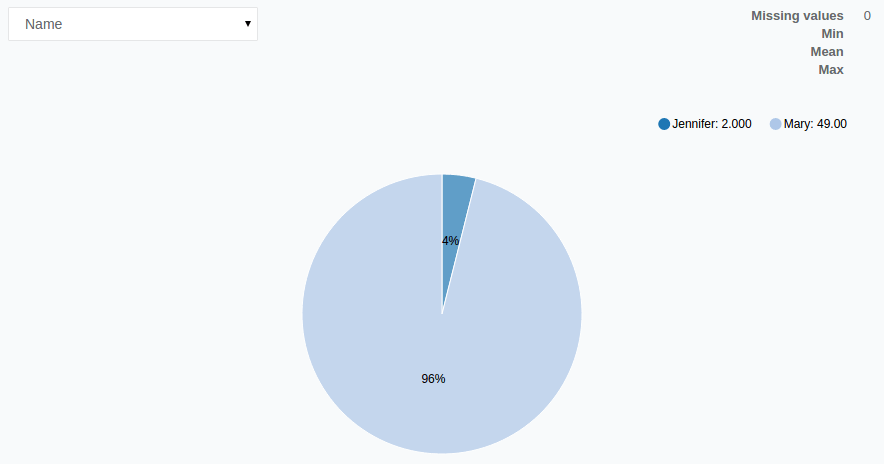 It turns out that Mary was the most popular name in Washington D.C. and 48 states with Jennifer topping the list in just two states.

Some parents like traditional names while others prefer modern ones. We will now explore which names were popular in the past, and which names are popular now. To do that we split our data into two DataFrames: 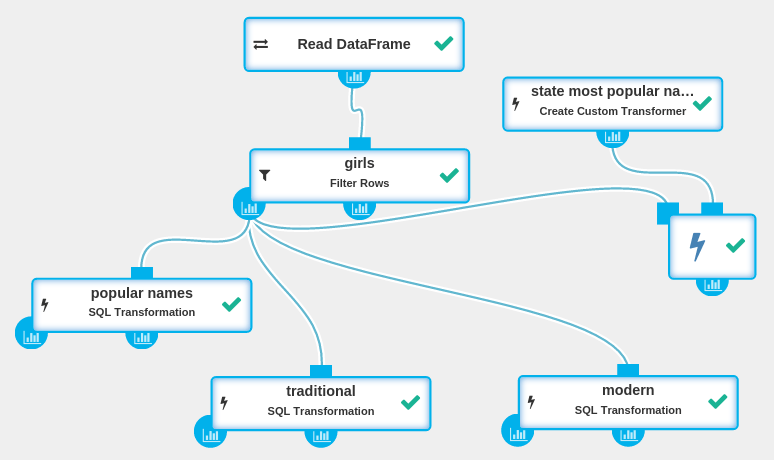 Now let’s find out what were the most popular names before and after 1980. We do not need to write another SQL Expression, as we already created a Transformer that does it for us. All we need to do is apply the Transformer to different DataFrames. The SQL Transformation operation, besides returning a DataFrame, also returns a SqlTransformer which can be executed using a Transform operation.
We can also use the previously defined Create Custom Transformer to calculate popular names in each state and just apply it to another DataFrame. 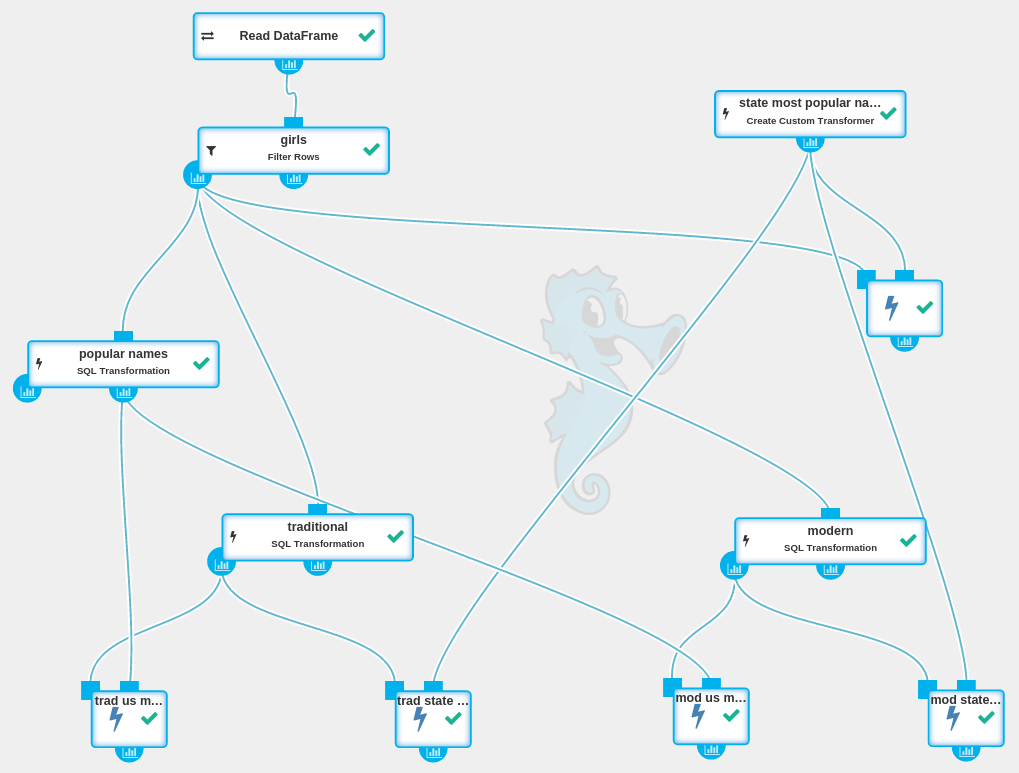 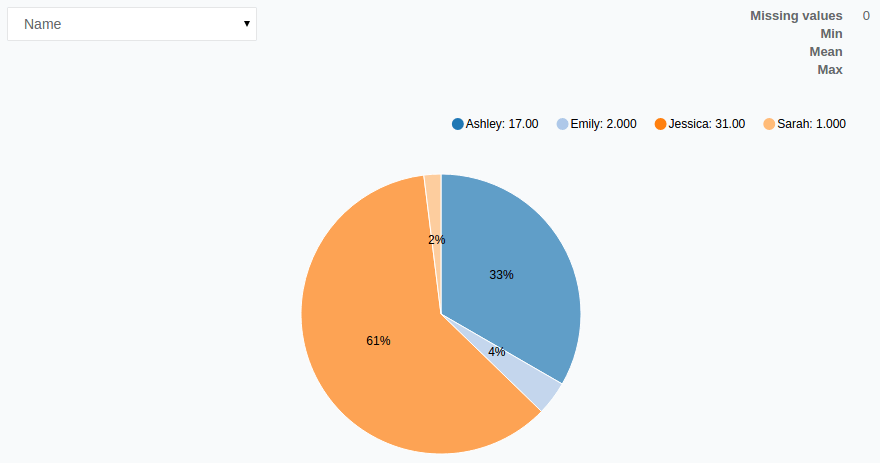 We can see that Jessica was the most popular name in 31 states, Ashley in Washington D.C. and 16 states, with Emily leading the way in two states and Sarah in one (New Hampshire).

As we discovered, the most popular names were:

Let’s filter only the data regarding these names and then take a closer look.
As a first step, we have to filter the data using a SQL Transformation operation with an appropriate expression:
EXPRESSION:

Now, let’s connect a Notebook operation to the newly created and filtered DataFrame: 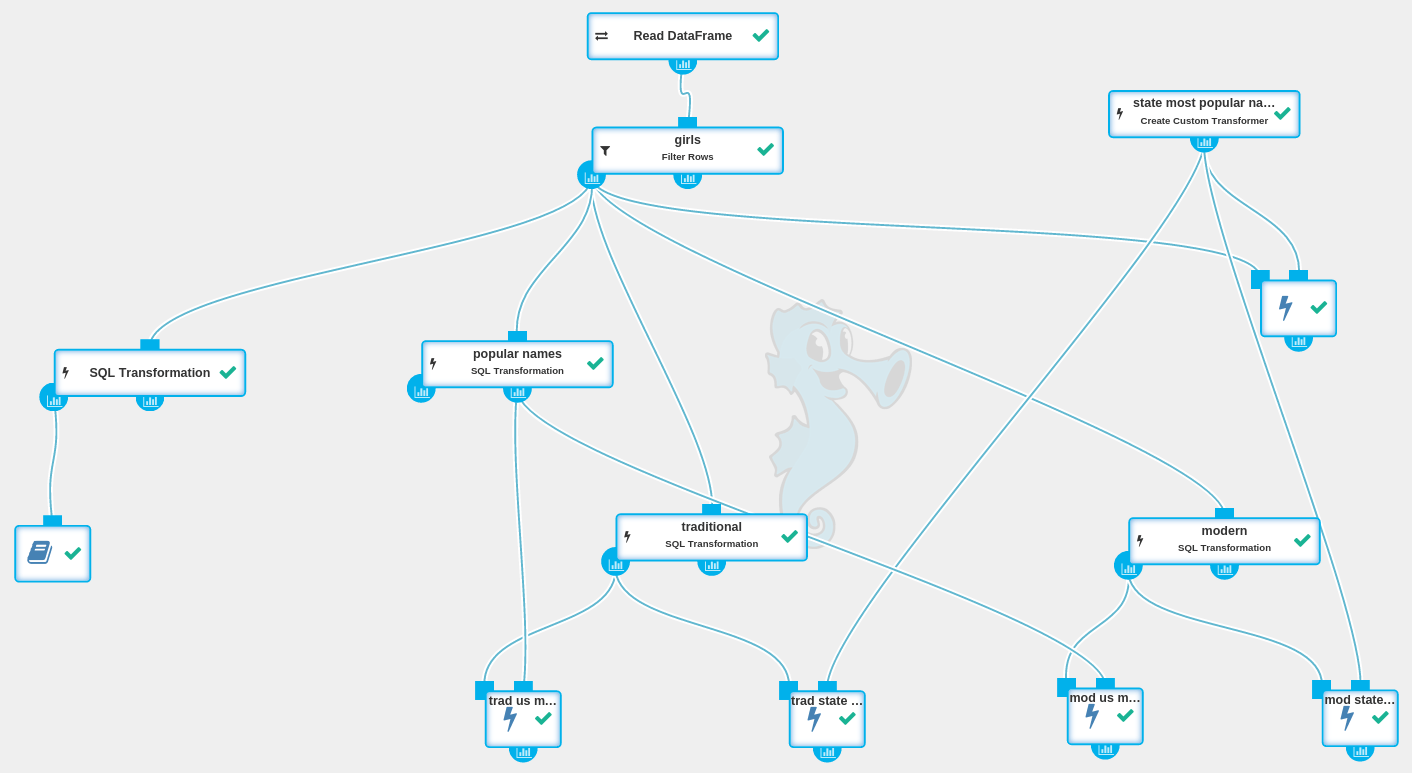 Notebook gives us the ability to interactively explore the data. We will use it to draw a plot of the names’ popularity. To do so, we need to execute the following Python code in the Notebook:

The code above prepares the data and draws a plot of the names’ popularity. After executing it, a plot will be displayed: 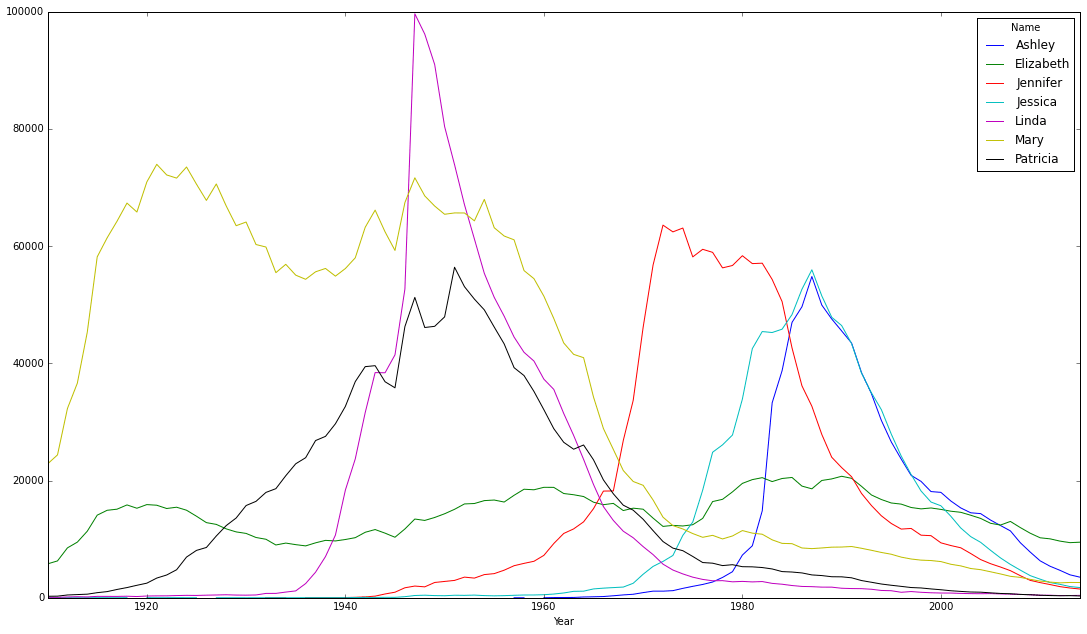 The graph shows that Mary was a very popular name until around 1960, when its popularity dropped. Meanwhile the popularity of Elizabeth has been the most stable throughout the time-frame.
The popularity of the name Linda is an interesting example as it  became hugely popular during the 1950s and then rapidly dropped back to its previous low levels. Linda may owe its brief popularity to Buddy Clark’s 1946 hit song “Linda”.

We have briefly explored U.S. Government’s statistical dataset. It transpires that names’ popularity may be influenced by many factors. For example, we have found that the most popular name in the last century was Mary, which may owe its popularity to Christian culture, but it has lost in popularity since the 1960s when counterculture revolution took place. Another interesting observation is peaks in names popularity influenced by popular culture (i.e. Linda). The next fact worth mentioning is that the faster a name becomes popular, the faster its popularity drops after reaching the peak (both slopes are similar). On the other hand, there are names with stable popularity, like “Elizabeth”, and they have their part in every generation.